So, it’s been at least a week since my last post! With the long weekend and taking a road trip with the dogs and Luis I really fell off lol Luis is in Ohio for work today so I made these for dinner tonight, and I will definitely have enough for lunch the next two days now 😉

If you time things right with this meal it shouldn’t take too long to make, and it is vegetarian. This can easily be made vegan by just leaving off the cheese though. My one piece of advise for this is to start the quinoa and roasting of the tomatillos and poblano first thing.  Those take the longest to cook, so while they are cooking you can do the rest of your prep work, like cutting the onion and mincing the garlic.  Also, if you are adverse to heat, which I am not, remove the seeds from the poblano before you chop it up.  I love things spicy, so i was happy to leave them in.

The recipe from Blue Apron is below the pic of my finished dish from last night, and check out the service for yourself at http://www.blueapron.com 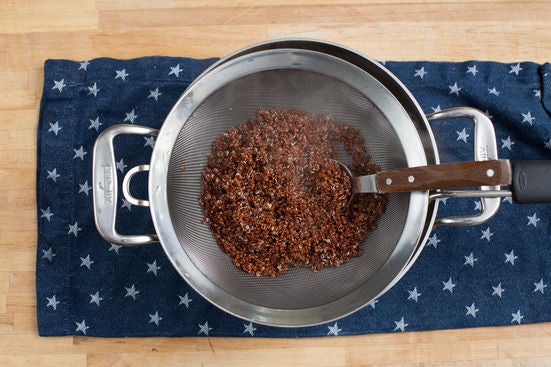 Preheat the oven to 500°F. Heat a medium pot of salted water to boiling on high.

Thoroughly rinse the quinoa under cold water. Once the pot of water is boiling, add the quinoa and cook 18 to 20 minutes, or until tender. Drain thoroughly and transfer to a medium bowl. Rinse and dry the pot.

While the quinoa cooks, wash and dry the fresh produce.

Peel and mince the garlic.

Remove and discard the papery husks of the tomatillos.

Peel and small dice the onion.

Pick the cilantro leaves off the stems; discard the stems and roughly chop the leaves. 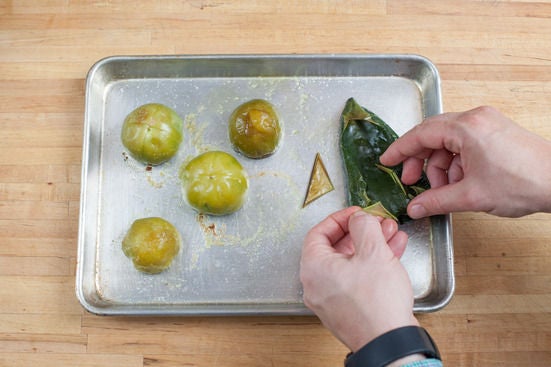 In the pot used to cook the quinoa, heat 2 teaspoons of olive oil on medium-high until hot. Add the garlic and onion; season with salt and pepper. Cook, stirring occasionally, 2 to 4 minutes, or until softened. Stir in the roasted poblano pepper and tomatillos and ½ cup of water; season with salt and pepper. Simmer, stirring occasionally, 4 to 6 minutes, or until thickened and slightly reduced in volume.

Remove from heat and stir in the juice of 2 lime wedges. 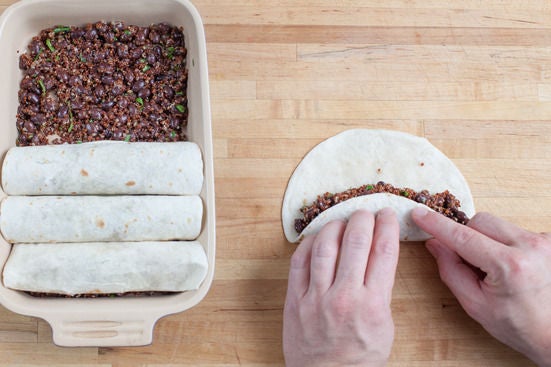 Make the filling & assemble the enchiladas:

While the salsa verde simmers, drain and rinse the beans.

To the bowl of cooked quinoa, add the drained beans, cumin, half the cilantro and the juice of 2 lime wedges. Drizzle with olive oil and stir to thoroughly combine; season with salt and pepper to taste.

Evenly spread about ½ cup of the filling onto the bottom of a baking dish. Place the tortillas on a clean, dry work surface. Divide the remaining filling between the centers of the tortillas; tightly roll up each tortilla around the filling. Transfer to the prepared baking dish, seam sides down, in a single layer. 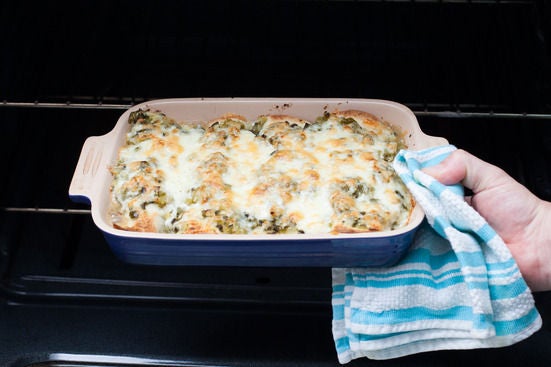 Finish the enchiladas & serve your dish:

Top the assembled enchiladas with the salsa verde and Monterey Jack cheese; season with salt and pepper.

Bake 8 to 10 minutes, or until the cheese is bubbly and lightly browned. Remove from the oven.

Let stand for at least 2 minutes before serving.